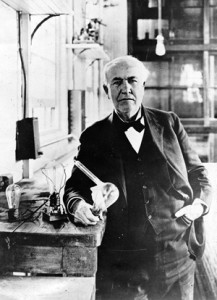 Light is a fundamental part of human life, it enables us to see the world around us. Once our days were limited by the sun’s natural light, today artificial light sources allow us to live our lives 24/7. The first artificial light source was invented in 1879 by Thomas Edison – the incandescent light bulb. The use of this new light source was limited to larger cities until 1935 when the Rural Electric Administration (REA) started bringing electricity to the masses.

The turn of the century also brought new innovations to the construction industry as the first skyscrapers were built. We now had large buildings and needed to light them. We installed thousands of the new incandescent light bulbs and we burned thousands of watts of power. Life was good, we could see and perform our tasks well into the night, we no longer had to fear deadly fires caused by lanterns and we had a renewable power resource in hydroelectric dams. And so it went until the invention of the fluorescent light bulb in 1938.

With the fluorescent bulb we now had a light source that lasted longer and put out less heat than a ceiling full of incandescent bulbs. They worked well in our commercial spaces, were less costly to operate and maintain. We filled our ceilings with lots of these new lights; the status quo was the more light the better. Unlike the incandescent bulbs which could be controlled with rheostats (dimmers) the new fluorescent bulbs could not be controlled, they were simply on or off. It wasn’t until our first energy crisis of the early 1970’s that fluorescent started to evolve. The first “energy savings” fluorescent bulbs and dimming controls were introduced around 1975.

After World War II inventions of products that used electricity were the all the rage, Americans wanted automation in our homes as well as our workplaces. We created everything electrical we could imagine….except lighting. Sure there were new modern fixtures designs but they all used the same incandescent bulb that hadn’t changed much since Edison’s invention. And that is where the lighting industry stayed until 1992 when the Federal government implemented the Energy Policy Act (EPACT) which phased out many inefficient light bulbs. Except, you can still find many of those phased out light bulbs in the market today, it didn’t seem to have much of an effect.

Now we find ourselves again in another energy crisis, we still don’t have renewable sustainable energy sources and we still use technologies invented over 100 years ago. Fortunately change is on the horizon and lighting products are in the forefront of this change. Just in the last couple of years new technologies such as LED (light emitting diodes) have hit the market and will be the leading lighting source of the future.

Typically new technologies hit the commercial market first and then work their ways in to our homes. This is true in the lighting industry too. There have always been two different sides in the construction industry which in turn creates two sides to the lighting industry as well; commercial and residential. Lighting is a fundamental component of a construction project and in the commercial segment energy efficient and cutting edge technologies have been an integral part of building.  Local and national codes for energy efficiency have dictated many of the technologies developed over the years: daylight harvesting, lighting controls, occupancy sensors, building sweeps. We have built many green sustainable commercial spaces. Unfortunately most of these technologies were not practical or affordable to use in our homes. This is now beginning to change; we are bringing new lighting technology into our homes just like we did appliances in the 1950’s.